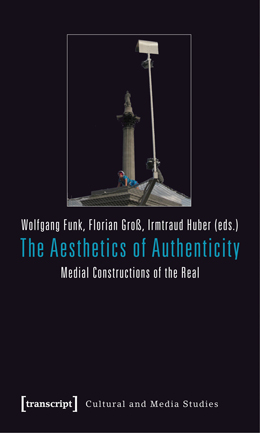 I am pleased to announce The Aesthetics of Authenticity: Medial Constructions of the Real, an essay collection co-edited by two of my colleagues, Wolfgang Funk and Florian Groß, along with Irmtraud Huber from the University of Berne. The book will appear in early May with German publisher Transcript. Here is a short abstract for the collection:

“As a concept that increasingly gains importance in contemporary cultural discourse, authenticity emerges as a site of tearing tensions between the fictional and the real, original and fake, margin and centre, the same and the other.

The essays collected in this volume explore this paradoxical nature of authenticity in the context of various media. They give ample proof of the fact that authenticity, which depends on giving the impression of being inherent or natural, found not created, frequently turns out to be the result of a careful aesthetic construction that depends on the use of identifiable techniques with the aim of achieving certain effects for certain reasons.”

And here is the Table of Contents:

“Authenticity as an Aesthetic Notion. Normative and Non-Normative Concepts in Modern and Contemporary Poetics” (Susanne Knaller)

“Found Objects. Narrative (as) Reconstruction in Jennifer Egan’s A Visit from the Goon Squad” (Wolfgang Funk)

“Authentic Bodies. Genome(s) vs. Gender Norms in Oryx and Crake, The Year of the Flood, and BioShock” (Sven Schmalfuß)

“Monica Ali and the Suspension of Disbelief” (Melanie Mettler)

“Poet and the Roots. Authenticity in the Works of Linton Kwesi Johnson and Benjamin Zephaniah” (David Bousquet)

“The Dilettantish Construction of the Extraordinary and the Authenticity of the Artificial. Tracing Strategies for Success in German Popular Entertainment Shows” (Antonius Weixler)