On December 17, 2018, I will be giving a talk titled “Participatory Horror: Glitches, Ghosts, and Networked Images” at the University of Siegen. Thanks to Marcel Hartwig and Daniel Stein for making this happen!

I am proud to have a piece on “Pre-Sponsive Gestures” and the work of French media artist Grégory Chatonsky included in the new issue of the Montreal-based ETC Media. Looks like a great issue, and happy to be in such good company!

Issue 110 of ETC MEDIA is dedicated to Grégory Chatonsky, who has curated the form and content of this special issue. A Montreal resident for the last ten years, the artist is a pioneer of net art, founding Incident.net in 1994, and an unflagging explorer of the relationships between technology and anonymous existence. In this issue, the artist and a few other friends, artists, philosophers, art historians, and art critics reconsider the last two decades of experimentation, a time in which the world drastically changed through the widespread use of the Internet to reach a digital omnipresence that heralds a near extinction. Divided into 3 sections—“infinitude,” “hyperproduction,” “without ourselves”—ETC MEDIA becomes a platform for navigating in our era and gaining a better understanding of a future whose portents remain deeply ambivalent—promising and threatening all at once. Rather than being reduced to trendy notions often misunderstood by the contemporary art milieu, the concepts of post-digital, accelerationism, and speculative materialism constellate a world in the process of perishing and being born. 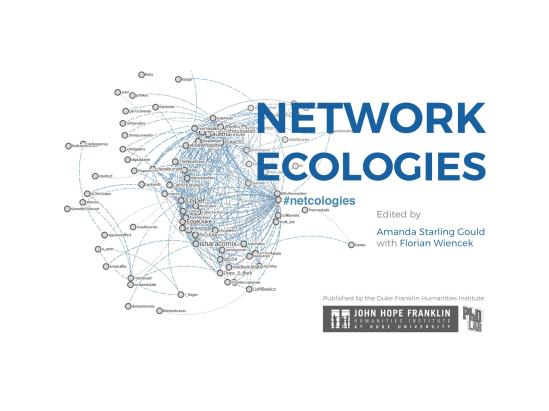 Network Ecologies is a great new open-access collection edited by Amanda Starling Gould and Florian Wiencek and published by the Duke Franklin Humanities Institute. The collection takes advantage of the Scalar publishing platform to include a variety of media alongside scholarly texts. Among other things, it includes a collection of artworks by Karin Denson and myself, which we developed for an exhibit at Duke in 2015 (also organized by Amanda Starling Gould) and which grew out of a collaboration with the Duke S-1: Speculative Sensation Lab. There is also an archive of videos from a 2013 symposium, including contributions from Jussi Parikka, Mark Hansen, Stephanie Boluk, Patrick LeMieux, and many others. Lots of great things to discover here–check it out!

On April 20, 2015, Karin and I will present our collaborative art project Making Mining Networking at the opening of the Network Ecologies exhibition at The Edge at Duke University. Also participating will be Rebecca Norton, whose work will make up the other half of the exhibition, which will be on display from April 20 until August 2015. We are very excited to show our work in this venue! (Stay tuned for the program of events on the 20th.) Above, our exhibit statement (scan the QR code for a brief video “user’s guide” that will give you a taste of what you can expect at the exhibit). Finally, here is the info about the exhibition posted on the Duke Libraries + Digital Scholarship website:

apr 20 Digital Studio KEYNOTE EVENT, Network Ecologies Arts in the Edge, Rebecca Norton & Karin + Shane Denson (The Edge, Bostock Library, Level 1, West Campus, Duke University campus map) The Network Ecologies Arts in the Edge exhibition will bring together two collaborative collections that will be featured in the Network Ecologies digital scalar publication. Combining machinic and human agencies in the form of generative sculpture, painting, and augmented reality (AR), the works by Karin + Shane Denson probe the material and virtual valences of “mining” in today’s networked ecology. Rebecca Norton uses affine geometry to explore actions and intuitions of intermediacy – what she describes as a feeling of being suspended in the middle stages of a process.  For this exhibition, Rebecca will be presenting a range of works, created in collaboration with Eddie Eliot, Erik S Guzman, and Kari Britta Lorenson, that include paintings, digital interactive artworks, and image stills from her current video project. This exhibition is an extension of Amanda Starling Gould’s multipart Ecology of Networks project which has already produced an online scholarly conversation (2012), a successful in-person Network_Ecologies Symposium at Duke University that featured keynotes Mark BN Hansen and Jussi Parikka (2013), a live-blogged digital scholarly publication design sprint and a second round of contribution accompanied by an innovative internal, ‘networked’ peer review process (2014), and plans to culminate in a multiauthored curated digital scalar publication, co-designed with Florian Wiencek, to be completed in winter 2015. The Ecology of Networks project has been sponsored by the Franklin Humanities Institute (FHI) and the Duke PhD Lab in Digital Knowledge, and generously supported by various Duke University departments. The core Network Ecologies Arts in the Edge exhibition will be open from April 20, 2015 – August 2015. On April 20, 2015 we will have an opening event with artist talks, hands-on demonstrations, and one-day exhibitions by our artists that will include a giant AR gnome, an AR treasure hunt, and a screening of a networked video that will be projected onto the walls of the Duke Edge Digital Research Commons. The Network Ecologies Arts in the Edge exhibition and event will be co-sponsored by the FHI, the Duke PhD Lab in Digital Knowledge, and Duke Digital Scholarship Services. Rebecca Norton: rebeccajnorton.com Shane Denson: medieninitiative.wordpress.com  Karin Denson: thenewkrass.wordpress.com For full event details, stay tuned here on our Duke Digital Scholarship Services Events Calendar. #netcologies

The program for the conference “Networks in American Culture / America as Network,” where I’ll be talking about Serial Figures as Mediators of Change, is now online: here. And here is the description of the symposium, which looks like it will be a great event:

In recent decades “network” and “networking” have emerged not only as popular buzzwords but also as key concepts in a variety of academic disciplines. The model of the network is used to describe a broad range of social, economic, media technological, and biological phenomena including social interactions, the global flows of goods and capital, the structure of the internet and social media platforms, as well as the neural organization of our brains. The concept of the network typically serves to analyze processes of multilateral interconnection and the complex systems of order they give rise to. While the study of networks has proliferated in the information, social, and natural sciences, literary and cultural scholars to date have been hesitant to develop a critical network theory.

This conference brings together German and U.S. American scholars to explore the contributions that network analysis can make to the field of American Studies. Forging connections between new media, literary, cultural, and science studies, the papers probe the theoretical and political implications that networks and networking possess as metaphor, interdisciplinary paradigm, aesthetic strategy, and communicative practice. 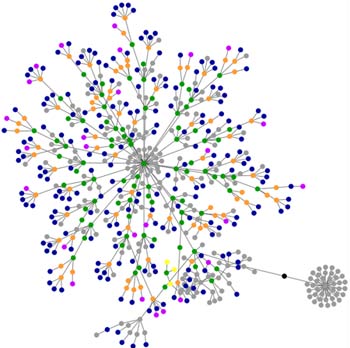 This is the abstract for a talk I’ll be giving in Mannheim, at a conference entitled “Networks in American Culture/America as Network” (16-17 March 2012):

Networks of Mediation: Serial Figures as Mediators of Change

Series, in a wide range of forms, constitute not only the “contents” of various media (television, film, literature, etc.), but might also might be conceived as media in their own right—though in a somewhat unorthodox, non-apparatic sense of the word. Here “medium” is related to “milieu”: environment for expression, articulation, action, or agency. Conceiving media this way means seeing them not simply as channels for communication between pre-existing agencies, but as co-constitutive of the agential potentials that can be realized in a given environment; in Bruno Latour’s terms, media and media-technologies are not mere “intermediaries” but active “mediators” that themselves enable distinctions between subjects and objects and thus play a radically non-neutral role in constructing networks of communication and interaction. Clearly, narrative television series, as one example, can be said to constitute the milieux in which their characters live and act; but to position series as media in a strong sense is to suggest a perspectival inversion of form/content relations, i.e. to see the framing medium of the televisual, filmic, or other apparatus as, in a sense, framed (or re-framed) by the series conventionally taken as that medium’s content. This reversal, I contend, is not arbitrary, but instead effected from within series themselves; the agents behind such inversions are those serially instantiated figures (e.g. Frankenstein, Tarzan, Batman, or Dracula) that populate series and move between a range of media, thus serving as loci for the proliferation of plurimedial networks. Such figures lead a double existence, at once anchored in the linear chains of ongoing monomedial series and also living in the interstices between (apparatic) media, forging decentralized or distributed nets or meshes among them. And particularly the interchange between linear and non-linear serial forms sheds light on transformations in the apparatic and discursive media that carry (and are carried by) series as mediators of media networks.