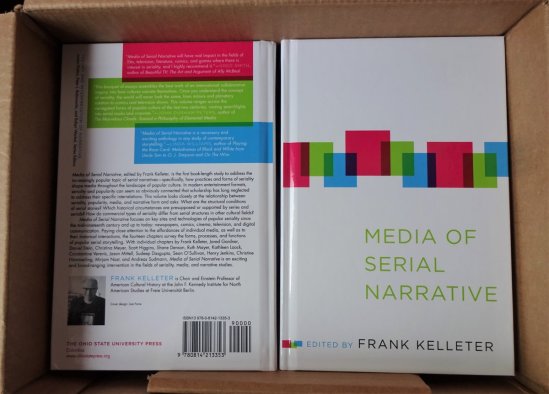 Following the recent publication of Media of Serial Narrative, edited by Frank Kelleter, there is a 4-part interview with Kelleter conducted by Henry Jenkins over on the latter’s blog. The interview is far-ranging and offers a good introduction to the volume and to the broader work conducted by the Popular Seriality Research Unit from 2010 to 2016, continued in ongoing work today.

Part one of the interview is here.

American Comic Books and Graphic Novels is a special issue of Amerikastudien / American Studies (issue 56.4), edited by Daniel Stein and Christina Meyer (my co-editors on the forthcoming Transnational Perspectives on Graphic Narratives: Comics at the Crossroads), together with Micha Edlich from the University of Mainz. The special issue, which I just found in my mailbox, has turned out to be a very nice collection of essays, bringing together theorizations of comics and graphic narratives as a medium or medial form and close readings of specific case studies. Also included is an interview with David Mack, conducted by Henry Jenkins. Daniel Stein has posted the full table of contents at his academia.edu page (here).

My own contribution, “Marvel Comics’ Frankenstein: A Case Study in the Media of Serial Figures,” continues my recent explorations of the nexus of seriality and/as mediality. Here’s the abstract:

This essay argues that Marvel’s Frankenstein comics of the 1960s and 1970s offer a useful case study in the dynamics of serial narration, both as it pertains to comics in particular and to the larger plurimedial domain of popular culture in general. Distinguishing between linear and non-linear forms of narrative seriality—each of which correlates with two distinct types of series-inhabiting characters—I argue that Marvel’s staging of the Frankenstein monster mixes the two modes, resulting in a self-reflexive exploration and interrogation of the comics’ story- telling techniques. Furthermore, I contend that this process sheds light on the medial dynamics of serial figures—that is, characters such as the monster (but also superheroes like Batman and Superman or other figures like Tarzan and Sherlock Holmes) that are adapted again and again in a wide variety of forms, contexts, and media. Though narrative continuity may be lacking between the repeated stagings of serial figures, non-diegetic traces of previous incarnations accumulate on such characters, allowing them to move between and reflect upon medial forms, never wholly contained in a given diegetic world. Accordingly, Marvel’s depiction of the Frankenstein monster leads to a self-reflexive probing of comic books’ forms of narrative and visual mediality, ultimately problematizing the very building blocks of comics as a medium—the textual and graphic framings that, together, narrate comics’ serialized stories.

Hosted by Department of Culture, Film and Media, University of Nottingham

This one-day conference looks to trace connections between the narratives of contemporary screen media and their contexts of production, distribution and consumption. We refer here to narrative as the presentation and organisation of story via the semiotic phenomena of image, sound and written/spoken word. We anticipate that speakers will explore ways in which stories and their on-screen telling are informed by contemporary industrial and technological conditions. We invite contributions from postgraduate and early-career researchers working across screen-based narrative media, such as film, television, comics, literature, video games and other areas of new media. We are interested to receive all paper proposals pertinent to the conference topic, though we particularly welcome those that engage with the following themes and questions:

Industrial determinants. In what ways are stories and their telling contingent on the production cultures, distribution methods, revenue models and governmental policies that configure a given creative industry?

Digital Technologies. How has the construction and/or reception of narratives been influenced by digital production equipment, distribution tech, online platforms and consumer hardware devices?

Seriality and Transmedia: In what ways do serial narrative forms, whether disseminated within a given medium or across multiple media, reflect industrial and technological contexts?

Audio and Visual Styles: How are the sounds and visions of contemporary screen narratives informed by conditions of production and reception technologies?

Send abstracts of 250 words to both:

Papers should not exceed twenty minutes in length.