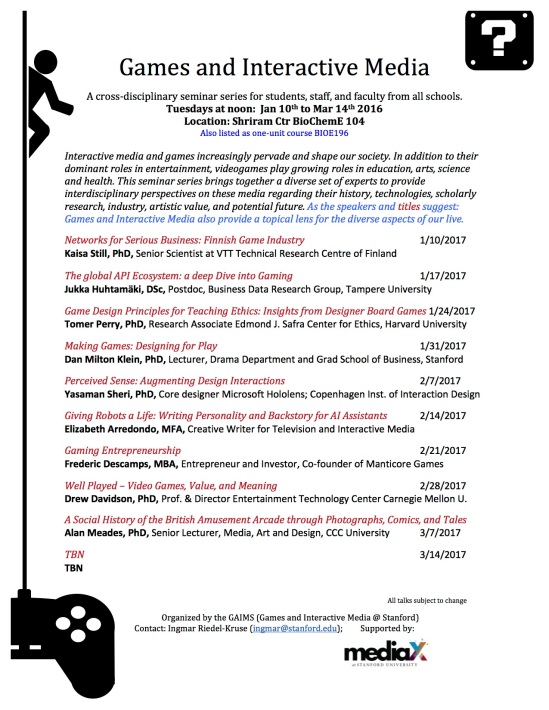 The Games and Interactive Media Series (GAIMS) at Stanford University meets every Tuesday at noon. Above, the list of speakers for Winter Quarter 2017.

Jason Lajoie’s abstract for the panel “Generativity and Creative Agency in Post-Cinematic Media” at SLSA 2016 in Atlanta:

The photo editor mode offered in The Last of Us Remastered (TLOUR), Naughty Dog’s 2014 Playstation 4 port of their 2013 Playstation 3 game, offers players the means to take a photo at any point in the game. This option alters and can also elevate user engagement within the game. It can also make statements about self-expression through gameplay, as notably illustrated by conflict photographer Ashley Gilbertson, who applied the same techniques he acquired in real-world conflict zones to the fictitious battlegrounds in the game, achieving his photographs by considering his situatedness as real spectator in virtual environments. From a game studies perspective, the photo editor mode enables new ways for players and designers to think about game design, and offers innovative means of expression for players to interact in a creative game space. My investigation draws on Roland Barthes’s exploration into the affective capacity of photographs, and Jose Van Dijck’s claim that the malleability and manipulability of digital photography affects the formation of identity by repurposing our memories and means of communication. What are the affective resonances of photographs on real spectators when the spectrum itself is virtual? By exploring the use of photo editor modes in TLOUR, and in other Playstation 4 titles like The Order: 1886, I consider the ways this program expands the affordances of gameplay and narrativity by providing players interactive means for creative expression in otherwise restrictive and linear game modes.

I am excited to be a part of the panel “Video Games’ Extra-Ludic Echoes,” which will be chaired by my colleague David Rambo at the upcoming conference of the Society for Literature, Science, and the Arts (SLSA) — hosted in Houston this year by Rice University, November 12-15, 2015. Below you will find the panel description and links to the individual abstracts.

Each of the three presentations in this panel perform their own media-theoretical approach to comprehend how video games extend and consolidate the sociotechnical logics surrounding their conception, production, and reception. We intend to kindle a discussion about the ways certain video games order significant ideologies and activities of human life: from multimedial culture industries to the blurred division between life and labor to the concealment of racism in the techniques of 20th-century entertainment. All three share a motivation to delineate various cultural and economic inheritances of video games and the transformative ways in which video games echo those inheritances.

Shane Denson’s contribution attends to the serial manifestations of Batman across genres and media. He hones in on the subsumption of life-time under work-time that is common to the computational networks of daily life and to the crossed borders of serial figures such as Batman. In Stephanie Boluk and Patrick LeMieux’s “White Hand, Black Box,” we learn to recognize in the maniculed pointer of various softwares’ interfaces and especially in the Master Hand of Super Smash Brothers the now concealed tradition of black minstrelsy as it was imbued by Disney in the gloved hands of Mickey Mouse and other characters. David Rambo deploys a Spinozist theoretical framework to categorize the video game, Diablo III in particular, as a neoliberal enterprise that extrinsically determines the player’s desire and even will to live. Spinoza’s Ethics thereby offers a way to conceptualize the video game both as an autonomous entity marked with finite, and thus fulfillable, completeness, and as a node in a much broader regime of affections that orders capital’s socioeconomic system.

These three presentations depict the video game as an artifactual conduit eminently bound up with the cultural forces that ineluctably structure our civilization, from its marginal groups to its most powerful systemic imperatives.

Abstracts for the individual papers:

Shane Denson, “Gaming and the ‘Parergodic’ Work of Seriality in Interactive Digital Environments”

My abstract for the panel “Video Games’ Extra-Ludic Echoes” at SLSA 2015 in Houston:

“Gaming and the ‘Parergodic’ Work of Seriality in Interactive Digital Environments”

Twentieth-century serial figures like Tarzan, Frankenstein’s monster, or Sherlock Holmes enacted a “parergonal” logic; as plurimedial figures, they continually crossed the boundaries between print, film, radio, and televisual media, slipped in and out of their frames, and showed them – in accordance with a Derridean logic of the parergon – to be reversible. In the twenty-first century, the medial logics of serial figures have been transformed in conjunction with the rise of interactive, networked, and convergent digital media environments. A figure like Batman exemplifies this shift as the transition from a broadly “parergonal” to a specifically “parergodic” logic. The latter term builds upon Espen Aarseth’s notion of “ergodic” gameplay – where ergodics combines the Greek ergon (work) and hodos (path), thus positing nontrivial labor as the aesthetic mode of players’ engagement with games. These new, ergodic serial forms and functions, as embodied by a figure like Batman, raise questions about the blurring of relations between work and play, between paid labor and the incidental work culled from our entertainment practices. Following Batman’s transitions from comics to graphic novels, to the films of Tim Burton and Christopher Nolan, and on to the popular and critically acclaimed Arkham series of videogames, I will demonstrate that the dynamics of border-crossing which characterized earlier serial figures has now been re-functionalized in accordance with the ergodic work of navigating computational networks – in accordance, that is, with work and network forms that frame all aspects of contemporary life.

“White Hand, Black Box: The Manicule from Mickey to Mario to Mac OS”

Whereas the manicule, a pointing finger directing a reader’s attention, has been used for a millennium in chirographic and print texts, in the context of twentieth century animation and twenty-first century computing the medieval pointer has been recontextualized as the hand of the animator to a graphic user interface (GUI) element. After the popularization of the talkie in the late twenties, in Steamboat Willie (1928), the first ever “Merry Melody” released by Disney, Mickey Mouse adopts gloves and the lilting voice of Al Jolson’s Jazz Singer (1927). This process sanitizes a genre of racist comedy for mainstream consumption. Although Mickey’s gloves are easily deemed merely a contrivance of the technical limitations related to articulating fingers in early animation, Bimbo and Betty, Oswald and Ortensia, Foxy and Roxy, and, of course, Mickey and Minnie are anthropomorphic animals that whitewashed their relation to racist caricatures inspired by blackface minstrelsy. This history was further obfuscated as “Mickey’s manicules” eventually found themselves as elements within the contemporary operating systems like Mac OS and as GUI’s within videogames like Mario Paint in the eighties and nineties. From the metaleptic manicule of classic animations to the metonymic manicule in the GUI, this paper ultimately performs a close reading of the figure of “Master Hand” in Super Smash Bros. (1998) in order to argue that the white hand allegorizes the ways in which “user friendly” design has black boxed the racialized history of computation.

“Spinoza on Completion and Authorial Forces in Video Games”

This talk extends the Spinozist paradigm for theorizing the medium-specificity of narrative and agency in video games I presented at SLSA 2013. Whereas Spinoza’s first and second orders of knowledge—phenomenal experience and rational systemization—map easily enough onto a single-player video game as a deterministic Natura; knowledge of the third kind would problematically seem to require an idealistic reduction of the video game into an operational and meaning-making Idea in abstraction from culture, political economy, and perhaps even the body of the player. Looking primarily to the changes made to Blizzard’s multiple releases of Diablo 3 (2012-2014), I propose that completion distinguishes the video game from other cultural forms and allows us to conceive of its essence. Pursuit of a game’s completion echoes, in Frédéric Lordon’s Spinozist terms, the ascription of one’s conatus to an enterprise’s regime of affects. For the notion of a game’s completion appears under the purview of the developers’ and industry’s ulterior motives. On one hand, the player’s motivation to complete a game redounds to the complex of desires that operate part and parcel with a game’s mechanics, marketing, and historical situation. On the other hand, total completion is a barrier that development studios intend to break by marketing supplemental material, exploiting customer data and feedback, issuing patches, and releasing expansion packs. Spinoza’s ontology of affection allows for a rational ordering of this tension between completion and incompletion in the individual playing and mass market consumption of video games. 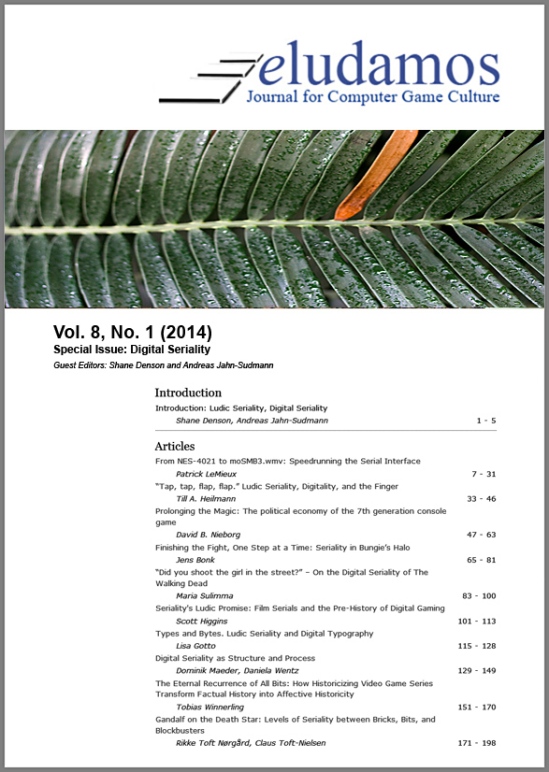 The latest issue of Eludamos: Journal for Computer Game Culture, a special issue devoted to the topic of “Digital Seriality” — edited by yours truly, together with Andreas Jahn-Sudmann — is now out! Weighing in at 198 pages, this is one of the fattest issues yet of the open-access journal, and it’s jam-packed with great stuff like:

So what are you waiting for? Do yourself a favor and check out this issue now!

medieninitiative
Create a free website or blog at WordPress.com.