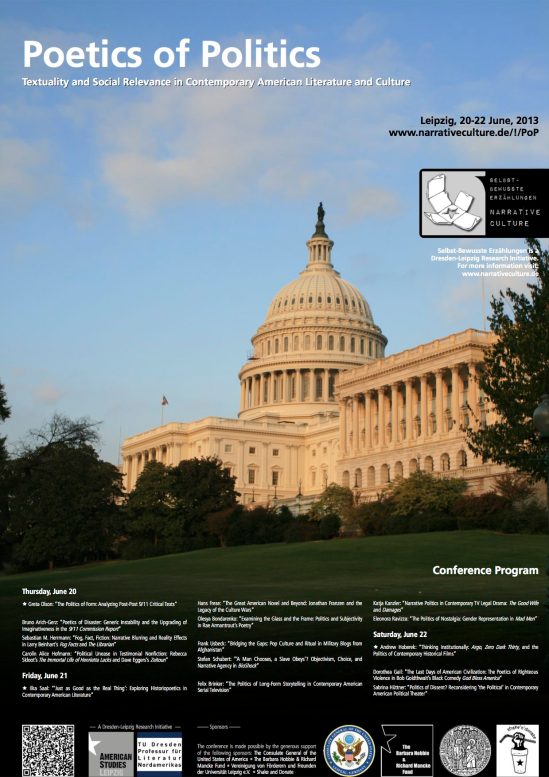 On Friday, June 21, 2013, Felix Brinker will be speaking about “The Politics of Long-Form Storytelling in Contemporary American Serial Television” at the “Poetics of Politics” conference in Leipzig. Felix’s talk builds upon recent work he’s been doing in the context of his dissertation project and related talks (for example, at the recent “It’s Not Television” conference in Frankfurt). Here is a preview of the upcoming talk:

The turn of American prime-time television dramas towards increasingly serialized storytelling during the last two decades seems to have coincided with an explicit politicization of their content. Especially shows discussed under the label of ‘Quality TV’ have been repeatedly celebrated and/or dismissed for their openly political agenda – be it for their engagement with the anxieties connected to the ‘War on Terror’ and the nebulous practices of intelligence agencies (as on Rubicon, Homeland and 24), or for attempts to tackle the social ills of contemporary urban America (as on The Wire or Breaking Bad). At the same time, other popular programs that at first glance seem to background political concerns in favor of more ‘escapist’ content (e.g. mystery-centric science-fiction or fantasy shows like Battlestar Galactica, Fringe, or Heroes) increasingly engage with matters of power, politics, and political intrigue and develop these motifs in ongoing storylines. While recent cultural and media studies publications on these phenomena have easily connected this renewed interest in political subject matters to the emergence of what Jason Mittell has termed ‘narratively complex television’ – that is, a (by now pervasive) shift in emphasis away from episodically contained storylines towards an ongoing serial narration that allows contemporary programming to construct richly furnished, expansive storyworlds and thus (among other things) opens up new possibilities for representing the complexities and intricacies of political systems and processes – less attention has so far been paid to the political dimensions of the increasingly active audience practices invited by such programming, and to the social aspects of popular seriality itself.

Located firmly within the competitive media environment of the convergence era, complex television series seek to engage their audiences in practices that extend well beyond ‘passive’ reception, and encourage them to become culturally and textually productive by participating in the discussion, interpretation and analysis of their favorite programs in dedicated online forums. Therefore, my paper argues that the political significance of narratively complex serial television manifests itself less on the level of content than on the level of form: By inviting their viewers to parse the complicated unfoldings of  narratives across longer periods of time, as well as across different media formats and paratexts, contemporary prime-time dramas ask their audiences to dedicate a considerable amount of their time to the engagement with a serially expanding text. By doing so, narratively complex serials not only ask their viewers to engage in cognitively challenging and time-consuming reception practices, but also inspire them to engage in the laborious creation of unofficial paratexts (such as wikis, blogs, and fansites) which chart the developments of storylines and characters – paratexts that serve both to render the increasingly complicated narratives accessible and as ‘free’ promotional materials that ensure the cultural visibility of these programs. These shows therefore thrive on the ‘free’ (i.e. unpaid) work of their viewers and employ it to secure their own continued serial proliferation. Drawing on recent conceptualizations of popular seriality that understand the active participation of audiences as an activity that is integral to the economic viability serial storytelling in general, as well as on post-operaist takes on immaterial labor as the predominant form of work in post-industrial societies, my paper argues that the contemporary centrality of such ‘participatory’ practices marks a profound shift in the relationship between work and leisure (or between recreational activity and professional media use) that coincides with the digitalization of our media environment.

To make its argument, my paper will take a closer look at contemporary serial dramas like Homeland, The Wire, and House of Cards, and identify the textual strategies by which these shows encourage a particularly active audience behavior. Drawing on Neil Harris’s concept of the ‘operational aesthetic’, I argue that especially moments of formal/medial and thematic self-reflexivity – that is, moments in which these series thematize, demonstrate, and comment both on the operations of the serial text and on the logics of the diegetic events it narrates – constitute central fulcra for facilitating the audiences’ ongoing and sustained engagement with serial television narratives. By repeatedly producing such moments of non-alienating self-reflexivity – for example in scenes in which a show asks their viewers to ‘recall’ events from earlier episodes and visualizes this by having its characters use diegetic media technologies – complex television dramas manage to call attention to the logics of their own narrative operations and suggest a particular, preferred way of engaging with the text without detracting from the story that is being being told. At the same time, I argue, these moments become productive for the representations of political systems and processes, since they usually also serve to thematize diegetic logics, processes, and chains of cause and effect. Such instances of formal and thematic self-reflexivity thus constitute moments in which the serial logics of narratively complex televisions shows are on display, and from which one could trace out the relationships between their representational politics and the politics of popular serial formats themselves.

American Comic Books and Graphic Novels is a special issue of Amerikastudien / American Studies (issue 56.4), edited by Daniel Stein and Christina Meyer (my co-editors on the forthcoming Transnational Perspectives on Graphic Narratives: Comics at the Crossroads), together with Micha Edlich from the University of Mainz. The special issue, which I just found in my mailbox, has turned out to be a very nice collection of essays, bringing together theorizations of comics and graphic narratives as a medium or medial form and close readings of specific case studies. Also included is an interview with David Mack, conducted by Henry Jenkins. Daniel Stein has posted the full table of contents at his academia.edu page (here).

My own contribution, “Marvel Comics’ Frankenstein: A Case Study in the Media of Serial Figures,” continues my recent explorations of the nexus of seriality and/as mediality. Here’s the abstract:

This essay argues that Marvel’s Frankenstein comics of the 1960s and 1970s offer a useful case study in the dynamics of serial narration, both as it pertains to comics in particular and to the larger plurimedial domain of popular culture in general. Distinguishing between linear and non-linear forms of narrative seriality—each of which correlates with two distinct types of series-inhabiting characters—I argue that Marvel’s staging of the Frankenstein monster mixes the two modes, resulting in a self-reflexive exploration and interrogation of the comics’ story- telling techniques. Furthermore, I contend that this process sheds light on the medial dynamics of serial figures—that is, characters such as the monster (but also superheroes like Batman and Superman or other figures like Tarzan and Sherlock Holmes) that are adapted again and again in a wide variety of forms, contexts, and media. Though narrative continuity may be lacking between the repeated stagings of serial figures, non-diegetic traces of previous incarnations accumulate on such characters, allowing them to move between and reflect upon medial forms, never wholly contained in a given diegetic world. Accordingly, Marvel’s depiction of the Frankenstein monster leads to a self-reflexive probing of comic books’ forms of narrative and visual mediality, ultimately problematizing the very building blocks of comics as a medium—the textual and graphic framings that, together, narrate comics’ serialized stories.

On Thursday, June 28 (at 6:00 pm in room 609, Conti-Hochhaus), Ulrich Blumenbach will talk about his work as German translator of David Foster Wallace’s Infinite Jest. The talk, titled “Der Übersetzer als Gärtner: Pfingstrosen, Kraut und Rüben,” will take place in the context of Florian Groß’s seminar on Infinite Jest, but everyone is welcome to come!

I have yet to hear from anyone at the annual conference of the German Association for American Studies, which is going on now (May 31 – June 3, 2012) in Mainz, but the volume pictured above — Transnational American Studies, edited by Udo Hebel — was scheduled to make its debut there. (The Amazon page is up, but currently listing the book as not yet available.) In any case, I look forward to reading the contributions to the volume, which the publisher (Winter) describes thus:

Transnational approaches and theories have reshaped the interdisciplinary trajectory of American Studies since the turn of the millennium. The further extension of perspectives on the United States and North America to prominently include Atlantic Studies, Hemispheric Studies, and Pacific Studies has complicated long-standing notions of ‘American Studies’ and problematized concepts such as nation, identity, and American exceptionalism.

The collection gathers thirty original contributions to transnational American Studies from the fields of cultural studies, literature, history, politics, and media studies. Individual essays reassess the global role of the U.S. and its perceptions from within and without, discuss how transnational and comparative explorations emphasize multidirectional processes of cultural exchange and transfer, and show how paradigms of migration and cultural mobility have taken definitions and practices of American Studies beyond traditional geographical and disciplinary limits.

Oh, and did I mention that I have a chapter in the book? (Sorry for the self-promotion, but that’s what blogs are for, right?) Anyway, my piece is called “Frame, Sequence, Medium: Comics in Plurimedial and Transnational Perspective,” and it’s a reworking of a talk by the same title that I gave at last year’s DGfA conference. (In case you missed it but are interested, a screencast video of the full presentation can be viewed here.)