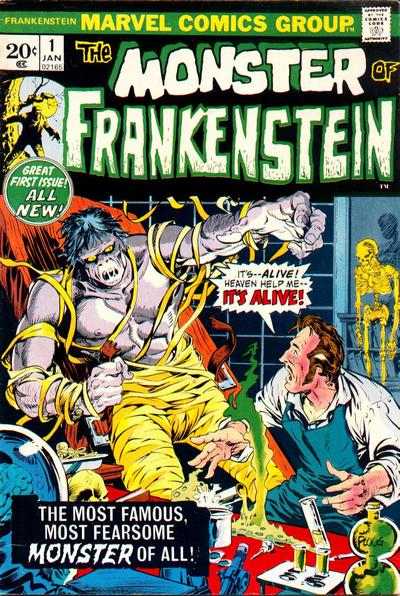 Here is the abstract for Shane Denson’s talk at the Illustration, Comics, and Animation Conference at Dartmouth College (April 19 – 21, 2013):

Animation as Theme and Medium: Frankenstein and Visual Culture

Frankenstein and above all Frankenstein’s monster are emphatically plurimedial figures; already in the nineteenth century, they escaped the confines of Mary Shelley’s novel and proliferated on theater stages and in political cartoons before embarking, in the twentieth century, on a long career in film, radio, TV, comics, and video games. In the course of these developments, the monster in particular has become an unmistakable visual icon, the general contours of which were more or less fixed in our visual culture through Boris Karloff’s embodiment in the early 1930s. The image, however, remains flexible enough as to be instantly recognizable in cartoonish illustrations adorning cereal boxes. In this presentation, I contend that the monster’s image presents a special case for thinking the intermedial networks that constitute our visual culture, owing to the fact that this icon is linked inextricably with “animation” as both a thematic and media-technical topos. The act of animation, or bringing a creature composed of dead corpses to life—subject to only cursory treatment in the novel—becomes the main subject and visual attraction of the tale’s filmic iterations, where animation is motivated not solely by narrative but linked also to a self-reflexive probing of film as a medium. The first Frankenstein film, Thomas Edison’s Frankenstein (1910), used reverse motion and trick photography to animate its creature, and it linked into early discourses of cinema, according to which moving images in general (rather than, as later, a special class of films) were referred to as “animated film”—for the cinema brought “dead” photos (cf. 19th century memento mori) back to life, as attested in the names of early-film companies and apparatuses (Bioscope, Vitagraph, etc). James Whale’s Frankenstein (1931), too, probes animation as both theme and medium in the midst of change, reviving this nexus (and the monster) in the wake of the sound transition, with its foregrounding of uncanny figures “electrified” by technical sound, showcased all the more by a mute monster capable only of inarticulate moans. Besides the cinematic trajectory, moreover, there is also a rich Frankensteinian comics tradition—which includes fumetti film tie-ins, Dick Briefer’s Frankenstein series of the 1940s and 1950s, various serializations at Marvel and DC, and even crossovers with superheroes like Batman, Spiderman, or the X-Men—that similarly probes “animation” as the thematic/medial wellspring of modern visual culture. Both in film and comics, graphic/visual treatments of Frankenstein approach animation (asymptotically, perhaps) as an enabling frame or parergon and thus relive, again and again, an iconic Urszene of the birth of modern visual culture and its self-reflexive mediality.